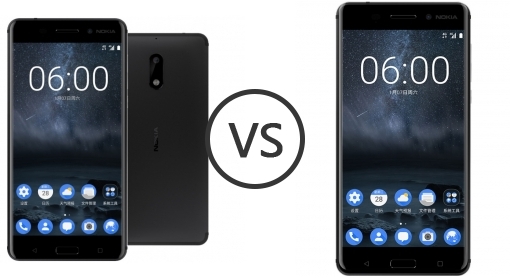 The second smartphone that’s going to come out from the Finnish manufacturer is Nokia 8. The latter is expected to be so much more impressive than Nokia 6 and to compete against the likes of Samsung, Google and Apple. Nonetheless, today we’re going to pin Nokia 6 and Nokia 8 in a brief comparison in order to see what we can expect.

Nokia has decided to use Qualcomm’s processors for both of its smartphones. However, the processor models differ. Without any further ado, let’s see what the two have to offer. Nokia 6 is powered by Qualcomm’s octa-core Snapdragon 430 CPU. The processor runs at a boosted speed of 1.4GHz Cortex-A53 and it is paired with an Adreno 505 graphics processing unit and 3GB or 4GB RAM, depending on the acquired variant.

While Nokia 6’s hardware internals might sound impressive, they pale in comparison with what Nokia 8 has to offer. The upcoming Nokia smartphone will be fueled by Qualcomm’s latest Snapdragon 835 CPU that’s been clocked at a speed of 2.45Ghz and that’s coupled with an Adreno 540 graphics processing unit and the whopping amount of 6GB RAM.