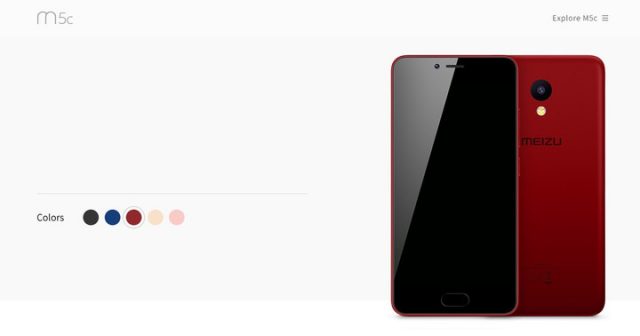 A recent leak shows that Meizu might be working on a cheaper variant of Meizu M5S, allegedly called the Meizu M5C. According to GizChina, the leak is from a non-live version of the Meizu website. Assuming that the letter C in the Meizu M5C stands for “cheap”, the upcoming smartphone is expected to pack decent specifications at a lower price tag.

Based on the picture, it is to be noted that the Meizu M5C looks very similar to the current flagship M5S. However, the upcoming smartphone may not sport a metal unibody design like the M5S, assuming that it will be targeted for the low-end market.

According to several rumors, the Meizu M5C is expected to come with a 5-inch display with 720p resolution. Apart from that, it will probably pack a 1.5GHz quad-core MediaTek MT6735 processor under the hood, along with 2GB RAM and 16GB internal storage. The camera is said to be an 8MP shooter on the back and a 5MP sensor on the front. Besides that, some rumors also suggest that the phone will be backed by a 3020 mAh battery.