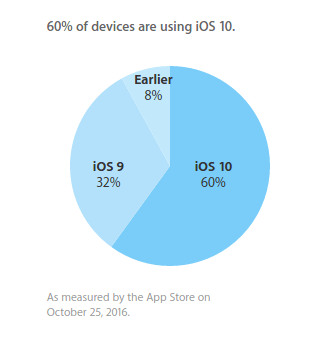 Apple has officially released their latest iOS 10 adoption numbers, revealing that 60% of the OS compatible iPhones/iPads are running on the latest OS. Almost the entire rise in adoption of the operating system has come from iOS 9 users who now form 32 percent of the total iOS users, compared with 38 percent in earlier report. 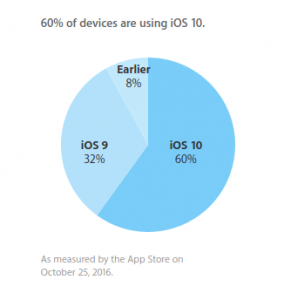 The company claims around 8 percent of active iOS devices are presently on operating system versions before iOS 9. Apple even compared their great adoption rate of the latest OS to that of Android, stating that 19% of Android users were still using Android 6, and 80% running even older versions of the operating system. While, the users with the latest Android v7 Nougat accounted to only a 1%.

Apple meant to highlight how iOS updates are perceived as more reliable by Apple device users, while users with a phone that runs on Android are less eager to update their software.